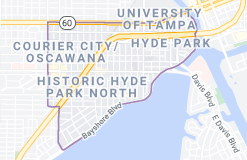 Hyde Park is a historic neighborhood located in South Tampa. This neighborhood includes Bayshore Boulevard, Hyde Park Village, and SoHo (South Howard). Here you will find historic homes and bungalows. History and proximity to downtown Tampa are why so many Tampa residents want to call Hyde Park home. Hyde Park’s boundaries are the Hillsborough Bay to the East, Kennedy Boulevard to the North, Bayshore Boulevard to the East and South, and Armenia Avenue to the West. Hyde Park is situated between the University of Tampa and downtown Tampa and is accessible via several major thoroughfares which include Kennedy Boulevard, Bayshore Boulevard, Howard Avenue, and Swann Avenue.

The neighborhood’s history dates back to the 1880s when railroad financier Henry B. Plant built the first bridge across the Hillsborough River. The first house in this neighborhood was built by James Watrous in 1882 at 1307 Morrison Avenue. You may notice that two streets in this neighborhood, Swann Avenue, and Rome Avenue are wider than the others. This is where the original streetcar line was installed. Most of the neighborhood streets in Hyde Park are much narrower.

Have a question? Contact The Viking Team Tampa Today!